Parse, the awesome mobile application development platform, is launching easy integration with Mailgun via their new Cloud Modules feature. Parse is launching Cloud Modules as part of the Cloud Code product starting with Mailgun and Twilio Modules. This will make it even easier for both Parse and Mailgun customers to use Mailgun from within a Parse-powered app. 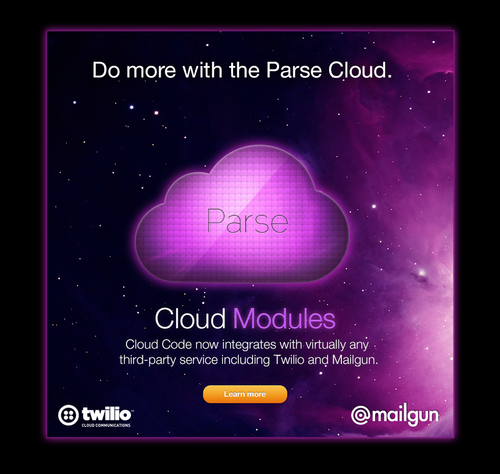 If you don’t already know about Parse, they provide a host of cloud services for mobile app developers. Parse and Mailgun both share a vision of making developers’ lives easier by dealing with infrastructure headaches so this is a partnership that makes sense for our joint audience. They have shown vision and leadership in the mobile development arena and we are proud to be partnering with them.

We are also really excited to help mobile developers who aren’t already using Mailgun realize the power of email automation.

Getting started is easy. First, simply add your Mailgun credentials.

Then you can easily send an email from Mailgun within your Parse app.

For more information, head on over to the Mailgun Cloud Module documentation.