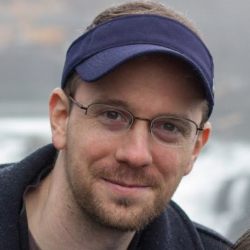 Looking at this flow, there are a few implications that stand out:

While none of these implications are particularly troublesome for the majority of applications, the extra round trips to the database can be influential for high performance, low latency applications. However, there is one more implication that may not be immediately obvious, the thundering herd!

The thundering herd problem is sometimes called a cache stampede, dog-piling or the slashdot effect. Essentially it is what it sounds like, a stampede of requests that overwhelm the system.

For this discussion, our thundering herd is in response to a cache miss. For example, In normal operation an application remains responsive under heavy load as long as the data remains cached. When the cache doesn’t have the data, concurrent instances of the application all attempt to render or access the data simultaneously. Depending on your application and the number of concurrent instances/threads in your server farm, this thundering herd of concurrent work could overwhelm the system and result in congestion of the system, possibly resulting in a collapse.

To combat this concurrent work, you would need a system to synchronize fetching or rendering of the data. Fortunately, there is a golang library called groupcache which can be used to resolve the thundering herd issue and improve on the remote cache implications mentioned above.

GroupCache differs from redis and memcache as it integrates directly with your code as an In Code Distributed Cache (ICDC). This means that every instance of the App is a Node in the distributed cache. As a full member of the distributed cache, each application instance not only knows how to store data for the node, but also how to fetch or render the data if it’s missing.

Step 5 is significant in the context of a thundering herd event as only one of the GroupCache instances will perform the render or fetch of the data requested. All other instances of the application that are also requesting the data from the GroupCache instance will block until the owning instance of the application successfully renders or fetches the data. This creates a natural synchronization point for data access in the distributed system and negates the thundering herd issue.

Step 2 is also significant as the ability to locally cache the data in memory which avoids the cost of a network round trip, thus providing a huge performance benefit and reduced network pressure. Since GroupCache is a part of the application, we avoid the possibility of the GroupCache deleting the data without the application’s knowledge as any such delete event will be shared by all instances of the application using GroupCache.

An admittedly minor benefit, but one that those of us who enjoy simplicity can appreciate, is that of deployment. Although it is not overly difficult to deploy and secure redis and memcached as separate entities from the application, having a single application to deploy means one less thing for an operator to deal with and keep up to date and secure.

It’s worth mentioning again as it’s easy to overlook. The ability for the cache implementation to render or fetch the data from a database during a cache miss and the ability to rely on a local in memory hot cache is what makes GroupCache a superior choice among distributed caches. No distributed cache external to your application can provide these benefits.

Groupcache as a synchronization tool

Because groupcache provides great synchronization semantics, we have found Groupcache to be a superior alternative to distributed or database level locks when creating and managing unique resources.

As an example, our internal analytics engine reads thousands of events and dynamically adds tags with assigned stats. Since we have many instances of the engine running, every new tag seen must be treated as a possible new tag. Normally this would generate a constant stream of upsert requests to our database. By using groupcache, each instance can query the cache with account:tag key. If the tag already exists, it’s returned with the latest data on the tag. However, if the tag doesn’t exist, groupcache relays the request to the owning instance and creates the tag. In this manner, only a single upsert is sent to the database when the system encounters a new tag.

Similarly, we use groupcache to count unique counters where the system should only record a single instance of a counter. Because we are using Groupcache, we avoid using a distributed lock and deadlock issues completely. This is especially useful when using a nosql database with little to no locking or synchronization semantics of their own.

Notable changes to the library are:

At Mailgun, our first production use of GroupCache has been in our ratelimits service. Since this service must operate at a very high performance low latency level, traditional caching systems were a concern as the more round trips we introduce to the request pipeline the more opportunities we have to introduce additional latency. The following graphs show the total number of cache hits and of those hits the total number of hits that resulted in a roundtrip to another GroupCache instance. This demonstrates exactly how much we benefit from the local in memory hot cache as opposed to making a roundtrip call on every request. 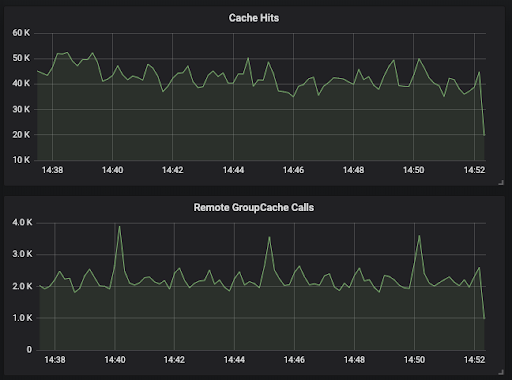 You can see in the next graph exactly how much mongodb and our application benefits from the thundering herd avoidance as new keys are retrieved from the system. 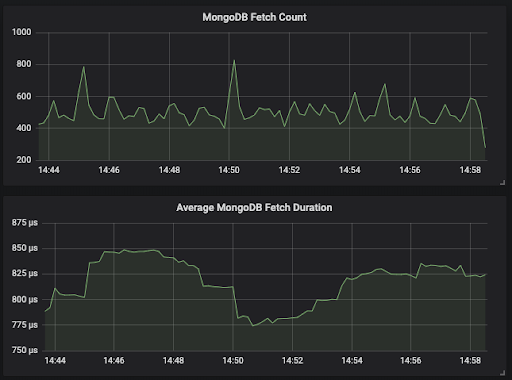 The actual calls to mongodb are a small fraction of the total requests actually made to the service. This, in addition to the speed of gubernator, is what allows our ratelimit service to perform at low latency even during high load.

Here you can see the rate limits service response times. Keep in mind for each request we make a gubernator call and a groupcache request which may or may not result in a groupcache http request or mongoDB request. (This graph shows the slowest of the responses, not the average).

A notable change to the Mailgun version of GroupCache is the ability to explicitly delete keys from the cache. When an instance wants to remove a key, it first deletes the key from the owning instance and then sends the delete requests to all other instances in the pool. This ensures any future requests from non owner instances in the pool to the owner will result in a new fetch or render of the data (or an error if the data is no longer available.)

As with any distributed system, there is the possibility that an instance is not available or connectivity has been lost when the remove request was made. In this scenario group.Remove() will return an error indicating that some instances were not contacted and the nature of the error. Depending on the use case, the user then has the option of retrying the group.Remove() call or ignoring the error. For some systems, ignoring the error might be acceptable especially if you are using the expired values feature.

The expire values feature allows you to provide an optional time.Time which specifies a future time when the data should expire.

In the scenario above where we temporarily lose connectivity to an instance, we say that the pool of instances is in an inconsistent state. However, when used in conjunction with the data expiration feature we know the system will eventually become consistent again when the data on the disconnected instances expires. There are other much more complex solutions to solving this problem but we have found in practice eventually consistent solutions are the simplest and least error prone way to deal with network disruptions.

A quick note about discovery, while GroupCache doesn’t provide a method of discovering instances there are several widely available systems to make discovery simple. I’ll list a few below with some examples to get you started.

GroupCache has been a fantastic addition to our distributed services toolset at Mailgun. It makes distributed caching and synchronization simple and easy to deploy. My hope is that others will discover the same benefits that we are enjoying and inspire other ICDC implementations in other languages.

Interested in working at Mailgun? We’re hiring! And there are several dev positions available. Check out our current openings here.